NAVIS is a challenging 2D arcade space shoot-em-up, with a physics twist. It is intended for the Game Makers Tool Kit (GMTK) "Duel purpose design" Game-Jam.

Shoot enemy's to take down their shields. After their shields are down, a few more shots, or ramming into the enemy's will destroy them. Your energy is both your health, ammo and boost, so be careful. Try to get a high score, and survive as long as possible!

How the game follows the theme of the Jam

The theme of the Jam is "Duel purpose design". so I have laid out all of the design aspect in the game, and all of the different purposes they serve.

Moving - Moves you to a new location, can be used as an attack.

Ramming - Kills enemy's with downed shields, Refills half of your health, gives you more points.

Enemy's - Endanger the player, allow you to quickly refill your health.

Aesthetics - Retro style, Readability. (I just had to throw that in)

Everything else - Jonas Knochelmann

Made for Windows, Linux and OSX

Note - I do not have a Linux or OSX system, so it might act weird. (I cant test it)

I would love to hear people's high score. 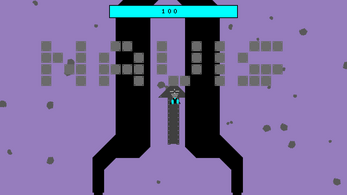